Tim and I had a wonderful conversation with our son a few nights ago and I reflected on how these past two years have been a transition into adulthood for us. I wanted to share them here in hopes they would help someone walking that parenting road from childhood to adulthood. Tim and I are normally very in sync with our ideas about raising the kids but I wanted to focus on my relationship with my adult children. This is my perspective, not necessarily his!

My two biological children are adults now. One is married and one is in college. For my oldest daughter, the transition from child to adult relationship was not as drastic because she lived at home until she got married, by her choice. Since she had a full-time job we just spent time with her whenever she was here. She ate with us if she desired but pretty much came and went as she pleased. She was respectful, though, and would let me know where she was and when she expected to be home. She paid for her phone, car and health insurance, a small amount for rent and anything else she wanted. She had no responsibilities per se to the family but she helped with babysitting and pitched in around the house when possible. (I’d love to say she kept her room clean but that’s another story 🙂 When Rachel met her husband-to-be things changed in that he would spend a lot of time with her at our house. He eventually just became part of the fixtures family.

With Rachel, our relationship changed over the years as her life changed and she began a new life with her husband. When Joshua left for college last August it was an abrupt, life-altering difference. Even though our relationship had been changing over the course of his senior year in high school, the immediate physical distance of college and freedom caused greater changes.

In his final year of home schooling Joshua began to pull away from me physically and emotionally. He was always a very demonstrative child and was never embarrassed to hug me and acknowledge me in public. This was one of the things I cherish(ed) most about my kids. In fact, when we began homeschooling in 1993 we went to a homeschool conference and saw older boys still holding their parents’ hands and genuinely enjoying their company. Tim and I decided right then that we wanted a relationship like that with our children and were willing to invest in their lives to make that happen.

Joshua and I would spend time together late at night because we are night owls and I was willing to take whatever time he had available. I knew this last year of high school would be fleeting. As the year progressed I felt more resistance to my authority, not necessarily in a disrespectful manner, but in preparation for leaving the nest. We struggled as teacher and student. Some battles were lost. Some were won.

My son first expressed an interest in getting a tattoo in the spring before his high school graduation. Of course, I was not for it. He started asking more intently around graduation time, showing me his research from the Bible and online and sharing his reasoning with me. I finally had to put my foot down and say no. I wanted him to wait until he got to seminary, talk to his professors and other students and see if his desire to be in Christian ministry conflicted with his desire for a tattoo. After about three days of not speaking to me, he finally made peace with my decision and our relationship was restored.

Joshua and I had always been close and when he began pulling away from me it was hard to recognize it as the natural progression to adulthood. I didn’t like it. It hurt and made me question my parenting skills. Until then, I was convinced I would be the one mom whose son still needed her when he went off to college. Didn’t happen. The weekend we dropped him off at college he continued severing the ties. Tim and I both cried much of the way home. I wept all that night. Painful stuff for a mom who has spent 18 years raising a son just to let him go.

My son then came home and got a tattoo during Labor Day weekend.  It is the words faith, hope and love in English, Greek and Hebrew. He did not make this decision lightly. I believe that he did pray about it, sought counsel from his teachers and church leaders and took our feelings into account. He got the tattoo high enough on his arm that he could still wear short sleeves without it showing. This was really his first big decision in adulthood. I struggled with it because I loved his unmarked, innocent young man’s body. But inside that body is still the heart that I worked diligently to capture all his childhood.

When Joshua came home for my birthday recently he got his ears pierced. The first time I knew of his interest was from skyping and seeing what looked like earrings. They were magnetic and easily removable, but I could tell where this was going! 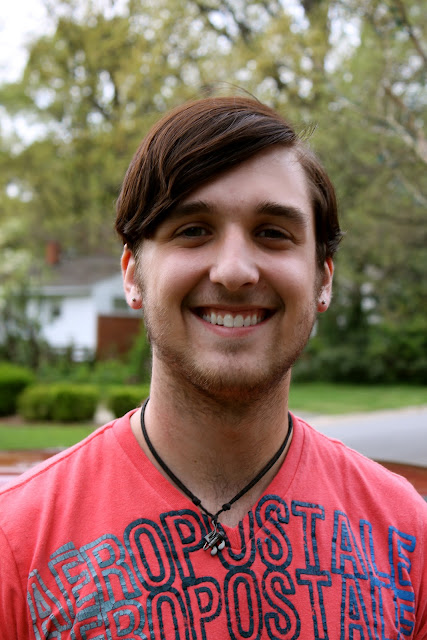 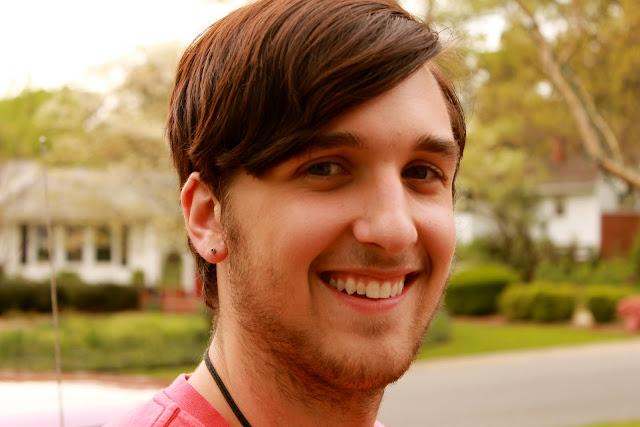 Terrible picture but you get the idea. 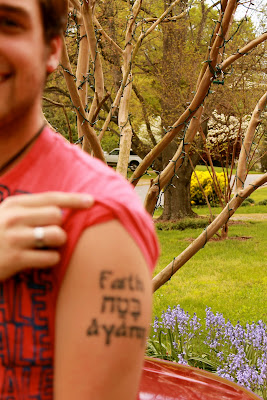 The first semester of college was a difficult one for me. Joshua didn’t really want to be home. He wanted to be with his friends and his new church family. He chafed at any restraints when he was home. His heart was just elsewhere. I didn’t push him to come home and he was only here when he was on break. He was not disrespectful. He needed that time to test his new freedoms and prove to himself that he could survive without us. I repeat: it was a very heartbreaking time for me. As much as I knew it was natural and God-ordained it hurt this mama’s heart.
Second semester has been different. He has pursued us. It wasn’t until our anniversary celebration that I believed Joshua wanted to be home again. Our home is where he decompresses, catches up on his sleep and bounces ideas off of us. This past weekend he spent a ton of time with his younger brother playing the board game Risk. It warmed my heart to see that relationship grow despite years of watching his brother make mistakes and push against his adopted family.
I write these things from the experience of one son in college.  I’m sure that some of my mom friends would look at him and think what a “bad boy” image he has.  My son never rebelled or walked away from his faith. What I see instead is a young man spreading his wings who still loves Jesus with all of his being. I have learned from years of God’s refinement that I shouldn’t “judge a book by its cover.”

What have I learned these last two years?

Give your young adult room to make mistakes – and learn how to fix them. By always rescuing our children we deprive them of the opportunity to fail and learn valuable lessons from that failure. It also gives us the opportunity to show grace and be a continuing influence on their lives.


Spend more time listening than advising. I tend to have all the solutions when I need to just listen and be a sounding board. Avoid lecturing. If I don’t listen, my child won’t talk to me.


Be available but don’t hover. During high school late nights were preferred for conversation so that’s when we would talk. Now I just try to remind him I’m here but I don’t hover over his life, expecting intimate details of his activities. I am grateful for the time that he gives me and pray that he knows his family is still interested.


Tell them you love them and are proud of them. I miss longer heartfelt conversations but sometimes a text is all he has time for. I text him saying I’m praying for him or miss him or whatever is on my heart. 140 characters or less!


Choose the relationship over being right. So many times we want to prove we were right, but does it really matter? The relationship needs to be more important or your young adult will find someone else to share his life with.


If you haven’t laid the foundation before it is less likely they will take your advice now. When our children are younger we make decisions that will affect them the rest of their lives. Some are within our control and others require deliberate intentionality on our part. Working outside the home, educational choices, outside activities, amount of tv/computer/phone time, etc.  are all areas we should give thought and attention to. These formative years are fleeting and demand an enormous amount of energy. You will not regret the love and time poured into your children.


Pray for them. Sometimes we think prayer is the last resort, but it should actually be the first. Ask God to send people into your young adults’ lives that will be wise and encourage them in their walk with the Lord. Ask how you can pray for them. Actively pray with them. (Confession: this is one area that has been a struggle for me in terms of modeling out loud. It’s never too late to start.)

I asked Joshua recently what was the most important thing he learned in our homeschool and he said it was learning how to learn. He was given opportunities to discover his interests, gifts and talents. To learn what he wasn’t good at. He would be the first to tell you he knows how to research, read comprehensively as well as skim, write and present a persuasive argument orally. All of these skills were nurtured years ago with his first pet (a guinea pig), his desire to get his driver’s license (we made him wait until he was almost 17, just as with his sister) and more recently, with his college decision. We worked hard to instill a love of learning through both demonstration in our own lives and making education practical and useful.

It took my son more than an entire semester to spread his wings, taste and experience adulthood and turn back in appreciation to the safety of home and the family that will always embrace him. It was a long few months and I missed him. 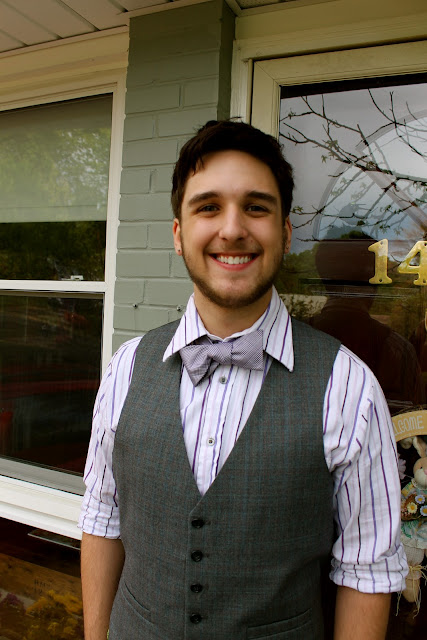 Joshua just left to go back to college after four days at home and I cried. Again. Just as I have every time I’ve said goodbye. He hugs his younger brother each time and tells him to be the man of the house when Daddy’s gone. And I cry. Again. I don’t ever want to forget that moment and the investment we each have made in each other. God is good. 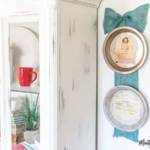 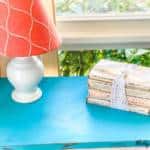 Sign up for my simple crafts and DIY projects and get my FREE guide: 5 Easy Ways to Decorate Your Home for Practically Nothing!